I am very keen to keep my wargame rules as simple as possible, yet capture the character of the 1790s. Morale dominates the games as the opposing sides are very different. Most of the French troops are 'levee' battalions, which I have chosen to base in column as their ability to change formation on a battlefield must have been limited, nor do I believe their volley fire had any great value. Of better quality, able to change formation, will be white-coated regular and blue-coated volunteer battalions, aided by a fair number of skirmishers. The British, Austrian, Dutch and German armies are often outnumbered, but they maintain the discipline and order of typical 18th century armed forces. Interestingly, French revolutionary cavalry have little in common with their later Napoleonic counterparts, the former are few in number, often poorly mounted, and no match for those in the service of the Allies. All figures are 28mm in scale, using a 1=25 ratio.

PASSING OF A FRIEND, JOHN TUCKEY

Just heard from a friend of mine that John Tuckey recently passed away, aged 88. I think its appropriate for me to remember him here. I started wargaming with John in the late 1980s, and continued to do so during the following twenty years. Among a certain generation, particularly those organising shows, he was a well known character. As a wing-commander, retired, he was every bit a no-nonsense, forthright sort of bloke, and he wasn't acting the part. I liked him, and others have said that when he mentioned my name, it was positive. I will take that as a strong compliment. I suspect many visitors to shows all over England from 1980 to 2010 will have seen his historical refights, always involving thousands of 28mm figures, and in all periods of history. Recently spotted a photo in a Featherstone book with a Tuckey game featured.  He later staged his own wargames show at Marston-Magna, Somerset, and I was pleased to put on a game at most if not all his shows. In his last few years he sold his collections and re-embraced model railways, but on occasions we did still speak. He was a powerful character, a British patriot, and I'm sad to know he is no longer with us. RIP John. 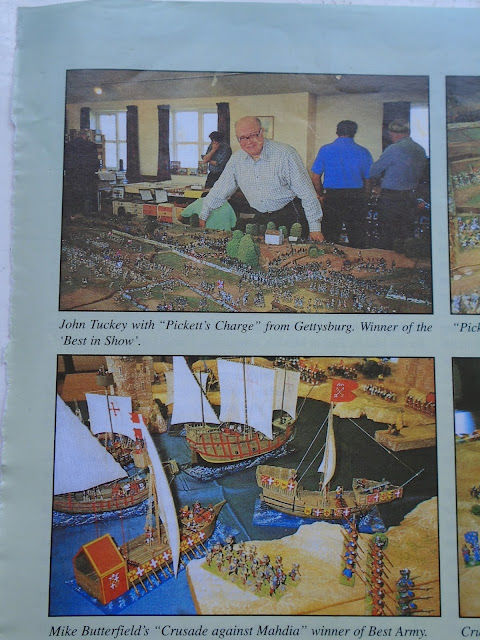 My other 28mm blog on Medieval and Renaissance wargaming