I am very keen to keep my wargame rules as simple as possible, yet capture the character of the 1790s. Morale dominates the games as the opposing sides are very different. Most of the French troops are 'levee' battalions, which I have chosen to base in column as their ability to change formation on a battlefield must have been limited, nor do I believe their volley fire had any great value. Of better quality, able to change formation, will be white-coated regular and blue-coated volunteer battalions, aided by a fair number of skirmishers. The British, Austrian, Dutch and German armies are often outnumbered, but they maintain the discipline and order of typical 18th century armed forces. Interestingly, French revolutionary cavalry have little in common with their later Napoleonic counterparts, the former are few in number, often poorly mounted, and no match for those in the service of the Allies. All figures are 28mm in scale, using a 1=25 ratio.

This model had been laying dormant for about two years. The fragile plastic masts had broken off, the ship's wheel was out of scale, the guns were missing, the paintwork was poor. I was seriously thinking about converting it into a prison vessel, as it certainly wasn't seaworthy. Pleased I decided otherwise, the strong wooden masts, rigging and sails, and new paintwork has made this something I'm keen to use The RN Ensign was added today. 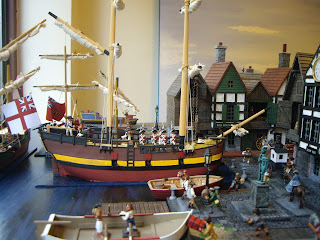 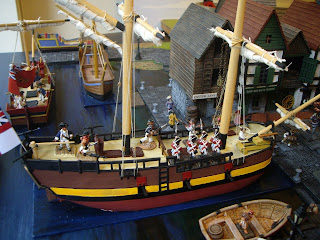 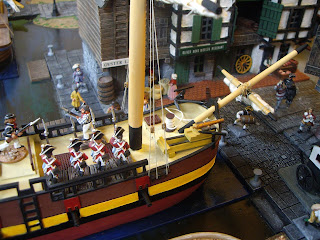 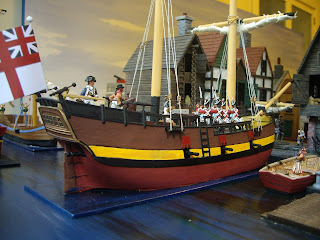 Have recently set up my third wargaming blog, devoted to larger scale figures. I must admit its been an enjoyable and nostalgic journey working with toy soldiers I remember from my childhood. Here are a few photos from recent posts. 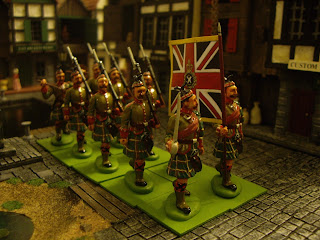 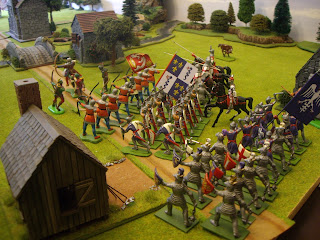 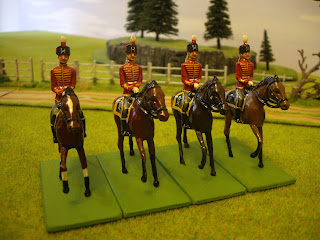 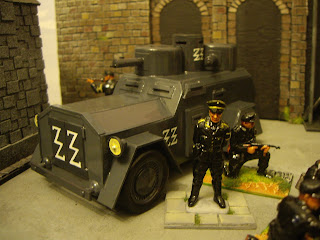 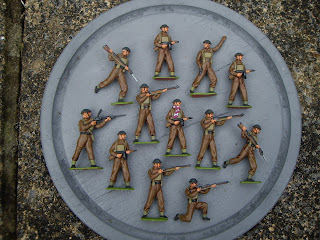 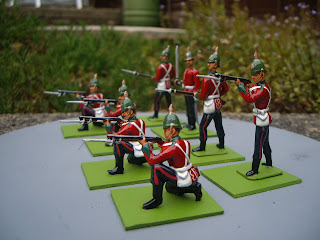 I have cross-posted this from my other blog SCIMITAR & CRESCENT WARGAMES, as it is also an 18th century subject, something which I do occasionally post on this page. Some time last year I picked up a small treen pot for 50p in a charity shop. Thought I might be able to make something interesting out of it. Today I have de facto completed my Efim Nikonov submarine, originally designed in 1721. I point out it was only designed that year as it failed all its testing, and the Russian government scrapped its funding for this project. Hope you agree, however, if it had worked, it would have been a useful weapon against the Ottoman fleet operating in the Black Sea....... and I hope to find out soon! MGB 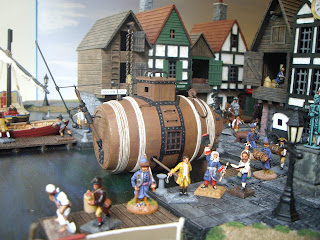 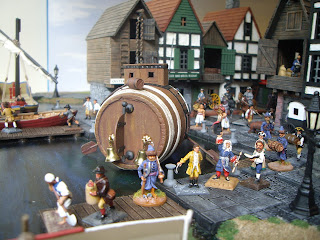 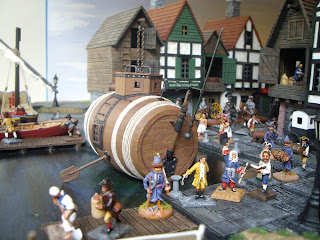 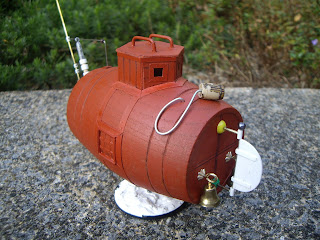 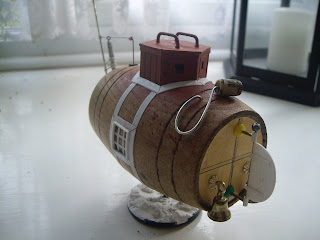 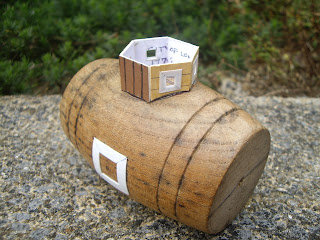 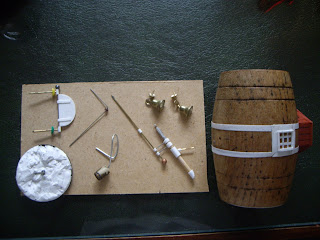 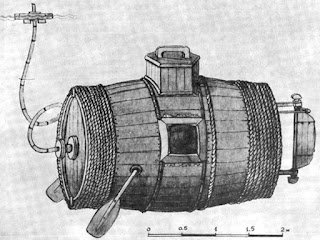 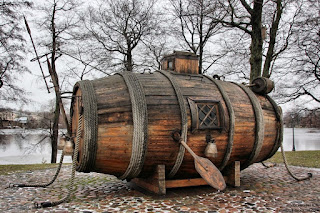 A few nights ago I watched this movie once more, and it really is a superb production. Set around the issues that caused the Spithead Mutiny in 1797, it lacks for nothing in its portrayal of a naval action against a French vessel. Starring Alec Guinness, Dirk Bogarde, Anthony Quayle, and many more fine British actors, nothing more needs to be said on that matter. I can confirm that the uniforms are not to be mocked, and particularly nice to see the Corps of Marines with 1796-7 coats, as it would have been far easier to supply them with just Napoleonic outfits from a theatre store. Do make an effort to find and view this film. MGB 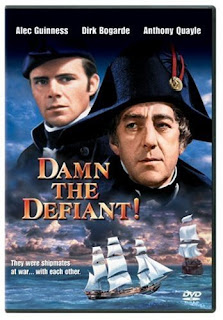 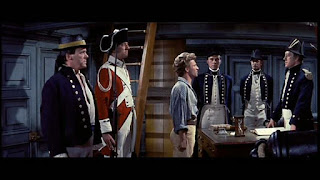 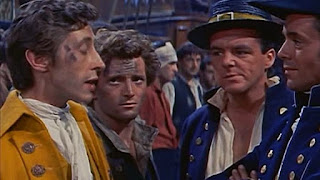 As a follow-on to the last post on policing, my 18th century Revenue Service has been strengthened. I made this vessel out of plastic-card quite a few years ago but I was never quite happy with it. The masts and deck layout have now been improved, and it has acquired a fixed light cannon and four swivel guns. And the whole model has been repainted. 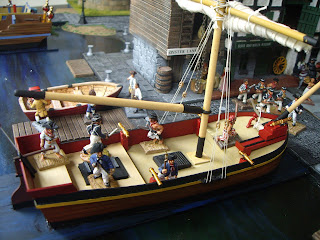 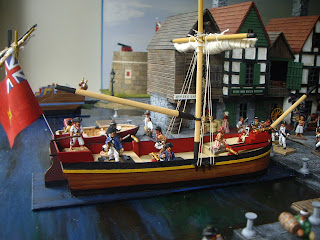 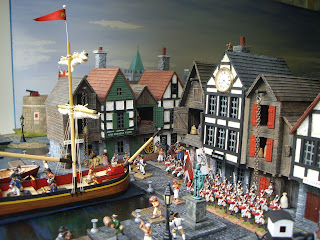 Despite my recent absence from wargaming some general maintenance did take place to my Georgian town. Thought it was also time the civil authorities had some ability to keep the peace without having to call out the Local Volunteers. The foot police are Trent Miniatures, the mounted are some converted Hinchliffe figures. I include some photos of new wagons, and another of His Majesty King George the Third inspecting some vintage artillery, these old pieces may date back to the 1930s?, and they can still fire matchsticks. Hope my paintjob has given them new life. 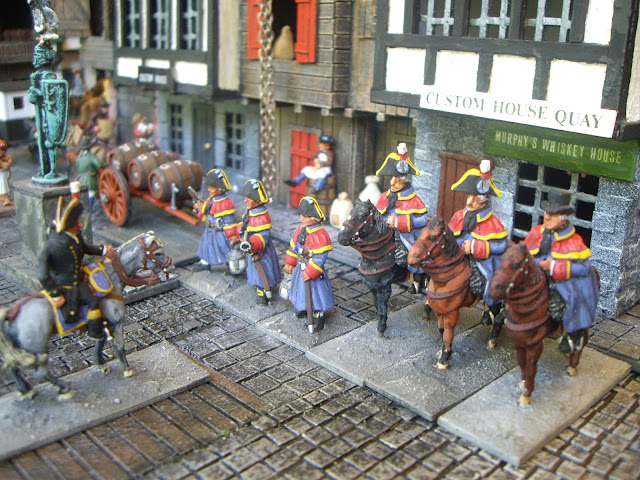 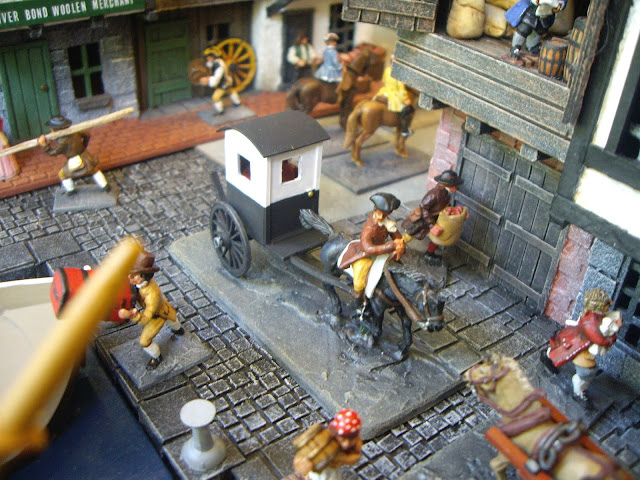 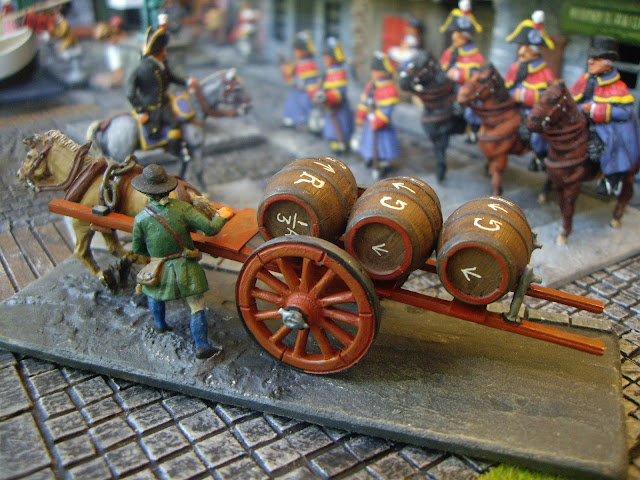 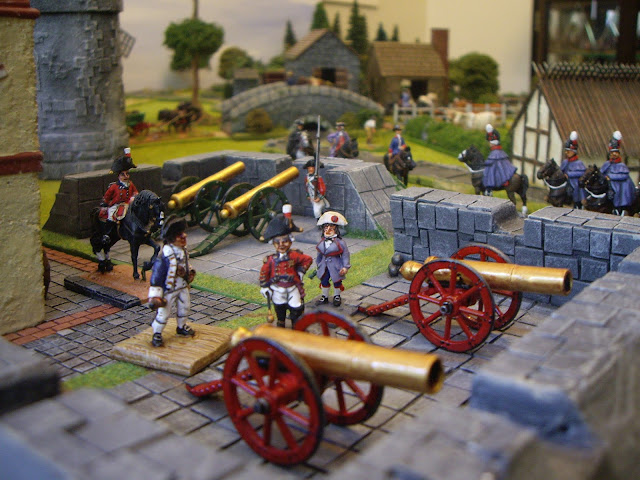 APOLOGIES FOR MY LACK OF ACTIVITY

Late last year my kidney disease moved up a level and it became necessary to devote time and effort towards other issues. From about March this year my health seems to have improved. It is now my hope to return to posting on several blogs, and to increase the actual number of wargames I stage. Regards, MGB

My other 28mm blog on Medieval and Renaissance wargaming